During my year in Japan I made an effort to really go some of the places I hadn’t managed to get to before. One of those places was Okinawa! It had always been a bit out of the way for my other, shorter trips to Japan, but living there it suddenly seemed much more feasible.

One of my lovely friends had come to visit me for a while and it was her first trip to Japan. We did some sight seeing all around Japan together, and decided since it was nearing the end of summer to pop down to Okinawa and enjoy the last of the proper Japanese summer temperatures and humidity (she tended to thrive in that weather – I more endured it hahaha!)

Okinawa was a really interesting place; a strange blend of things that felt both very Japanese and very not Japanese – something which makes a lot of sense given it’s history. There a fascinating elements of the indigenous people and culture, which you can experience, and the language differs too. Perhaps someone more fluent in Japanese would have less trouble, but as someone who learned Japanese as I went – survival-mode style – in Osaka, sometimes it was trickier. That being said, the people were still lovely and friendly and understanding so if you’re happy to look a bit silly then it’s still pretty easy to communicate.

We arrived at Naha airport and jumped on a train to the centre of the city. At the time on most of the trains we went on (as in the rest of Japan) there are warning signs about getting your fingers stuck in the door, but these were cuter than most! And very appropriately ocean-themed! 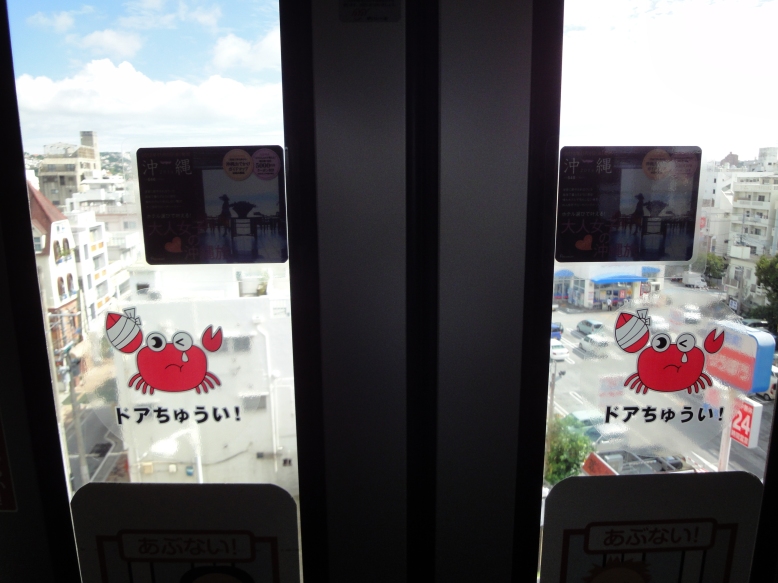 Now, because Okinawa is an island (and yes Japan is of course made of islands, but Okinawa just feels more island-y than the rest of Japan’s main four islands) there is some great seafood to be had. Also, though, there’s some really unique local cuisine you can try. Some of it is more traditional than others, some is immediately delicious, and some is perhaps more of an acquired taste. 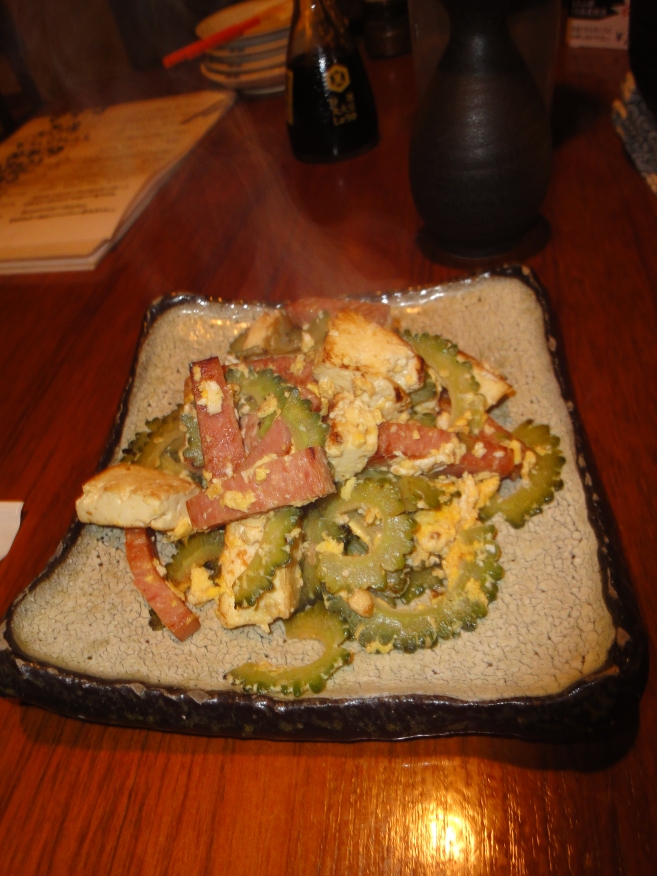 Goya Champuru – a sort of salad type dish, made of spam/thick cut bacon, scrambled eggs, tofu, and goya (bitter melon, which grows abundantly in Okinawa). Pretty tasty when done properly but be careful with DIY because the goya can be very bitter if not prepared well.

The same night as the goya champuru; a selection of three samples of traditional Okinawa cuisine. Top left: a type of sea plant which was simple but refreshing. Bottom left: a silken tofu variant with tiny preserved fish on top. Bottom right: a type of tofu that had been further fermented in Okinawan spirits and oh my goodness was this an intense taste (glad I tried it for the experience, but probably won’t order again – I think it might be one of those things you have to grow up with, like vegemite or natto).

The goya champuru was pretty great and I have since tried making it myself with varying degrees of success! I also quite liked taco rice – a dish that is essentially taco fillings on top of rice and I’m pretty sure has arisen out of the fusion of cultures with the American army base in Okinawa. You can also get sushi with taco rice fillings for taking the food fusion a step further!

While the food was an adventure in itself, the rest of Okinawa was also brilliant. Near Naha there are a number of beautiful beaches (plus many further away but time and transport limited us on this trip). The streets and suburbs feel very island town-ish, if that makes sense. There’s a generally relaxed and laid back feel, complete with old men playing chess, guitarists playing songs to whoever wants to listen, and cute cats sunning themselves near the foreshore. 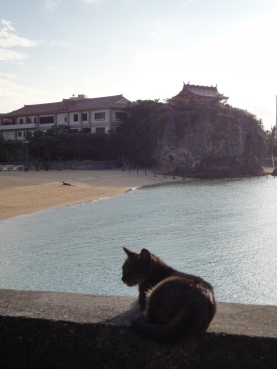 I had a chance to go swimming here, on a day when we had an hour spare after other activities, and it was the perfect temperature, though definitely different from any other beach. You can see in the pictures about the cats nearby and the temple on the hill, which drops suddenly down into the ocean. If you looked slightly to the right you can see that the beach and the sea actually had a highway built over it! Unusual, but I love unusual experiences so obviously I had to visit and swim. 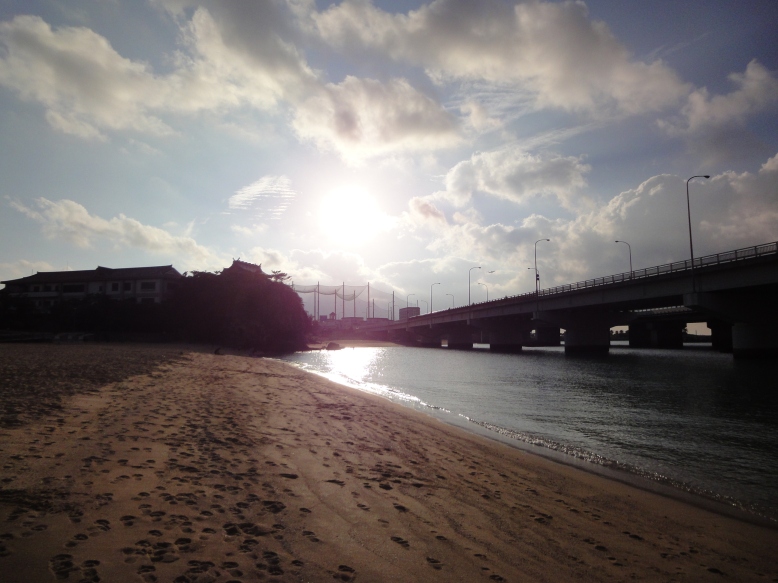 Sun setting over the beach under the highway!

Little me enjoying the water! From Melbourne, I thought the beach was a great temperature, though the locals didn’t agree so I had it mostly to myself!

A little out of Naha, though technically still within the city bounds I think, is Shuri castle, which is both impressive and offers impressive views of the city below. The architecture is pretty interesting too, because again although it holds some aspects that are familiar to me from visiting a number of Japanese castles, there are also elements which differ.

Whilst most of our time was spent in Naha (and we only had a few short days in Okinawa) we did get a chance to venture away from the main city. One great place to visit, especially if you’re not there in the height of summer for swimming and other water activities, is Churaumi aquarium, which I’m pretty sure still boasts the largest singular tank in the world (as compared to Kaiyukan aquarium which I think has the tallest singular tank in the world). While Kaiyukan has perhaps more variety, Churaumi astounds by the size of the tank but also the size of the fish there; including, of course, the whale shark.

If fish aren’t your thing, the there is also a butterfly sanctuary up north of Naha, not too far from Churaumi! The most impressive butterflies I saw were simple black and white but their chrysalises (is that the right plural?) went actually gold. Not just bright yellow. Real, metallic, gold colour.

Much of the rest of our time in Naha and Okinawa was spent wandering the streets and visiting the beautiful beaches, which included admiring all the beautiful flowers! So, I’ll leave you now with a few pictures of some of my favourites of both flowers and beaches. If you have spare time in Japan and want an experience that both is and isn’t Japanese, then I’d recommend Okinawa, especially if you like swimming and snorkelling and summer!